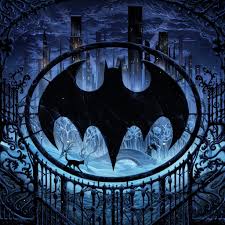 Dark screen. Ominous Batman music humming faintly in the background. And out of the blackness, we hear Kevin Conroy’s class voice.

“I’ve been thinking lately. About you and me.”

A gasping shudder washes over the crowd as those familiar with Batman’s greatest stories recognize this bit of dialogue. But even as there is awe, there is also confusion- haven’t we seen this before?

While this internal dance takes place, the screen lights and we are taken across a montage of live action Batman portrayals, without ever actually seeing Batman. We see various incarnations of Gotham, of the Batcave, of the glowing Bat-computer, of Commissioner Gordon, a fleeting glimpse of a specially shot image of Batman holding Jason Todd’s lifeless, burned and bombed out body, and finally the Batsignal. Kevin Conroy speaks again.

“About what’s going to happen to us. In the end.”

Now we’re seeing decades’ worth of headlines about the Joker. The mass homicides, the gang violence, the prison breaks, the kills for sheer joy, a specially shot glimpse of him shooting Barbara (face carefully concealed behind the flash), also ending on the Batsignal. Kevin’s voice graces us once more.

“One of us will have to kill the other… won’t we.”

Immediate cut to a classic chase scene on the streets of Gotham. The robbers are fish tailing it out of there. A bat-figure that’s not quite Batman soars the skies right above them. A batarang flies from the yellow glove that comes into view. It hits home, sending the car careening into the side of the building. A caped figure swoops out of the air, landing on top of the car. Driver shoots through the roof, and the figure somersaults neatly and kicks him so hard he and his passenger fly out of the passenger door. Light shines.

It’s Orphan as Batgirl, being guided by Oracle who also coms Tim to let him know this car was a decoy. We cut to Tim Drake performing a similar maneuver with the same results. Then we hear a male voice assuring them that he’s got it- cut to Nightwing catching the main crook.

The story spirals off from here. An older, jaded Bruce (Kevin Conroy) limits his Batman activity to only extreme emergencies, while fiddling with technology that can enhance him (showing glimpses of what long time fans will recognize as early versions of Batman Beyond armor). Meanwhile Commissioner Gordon has cancer, but is targeted by a philanthropic organization for a special cure which heals him. Homeless people start disappearing off the streets of Gotham, while the rich and famous are killed by special Batarangs with a clown face as the centerpiece.

Cut to a dark lair, with minions approaching a small throne. We hear Mark Hamill’s Joker giggle. The henchman is babbling about how the operation was botched because he forgot the new management had ordered extra security. Joker stalks toward him slowly. In the light we can see that he’s older. Heavier.

“Memory’s so treacherous. One moment, you’re lost in a carnival of delights, with poignant childhood aromas, the flashing neon of puberty, all that sentimental candy floss. The next, it leads you somewhere you don’t want to go.” Joker shoots him and then sits on the floor cradling the body. “Somewhere dark and cold, filled with the damp ambiguous shapes of things you’d hoped were forgotten. Memories can be vile, repulsive little brutes! Like children, I suppose.” Another classic giggle as he pulls himself to his feet. His eyes cast around and land on an old picture of him and Harley. He looks sad. “But can we live without them? Memories are what our reason is based upon. If we can’t face them, we deny reason itself!”

A henchman comes to inform him of the next phase of their plan manifesting, which pleases Joker to no end. He cackles madly.

So we get flashes of Joker doing his thing. Nightwing, Robin, Oracle, and Batgirl are on a mad hunt for the Joker imposters incriminating Batman. Batman is on his own hunt, looking for what all of this is distracting them from. Right when he discovers the connection between Nasa and the name of the person who’d healed Commissioner Gordon (J. Chill), he gets a message from Joker. His whole team has been picked off (by the joker impostors they tracked down), and he’s inviting Batman to get them.

Batman loads up and goes to get them. He has to go through a tower similar to the one Bruce Lee did in Game of Death, but he does it Batman style. Commissioner Gordon figures out Joker’s endgame (drop a satellite on the whole city). Meanwhile, Batgirl breaks out and frees Nightwing, who frees Tim. They take out their security, only to find out that they’re on a boat far from Gotham. And that’s when they realize that they were the feint. The distraction. This was personal between Joker and Batman.

Commissioner Gordon gets in contact with Alfred, who arms the batplane and remote pilots it into the satellite. There’s a big explosion, which lights the sky, which pisses off the Joker, who says he guesses he’ll have to crush Gotham the old fashioned way.

Batman finally gets to the Joker, where they trade a few classic fight moments (flower acid, face punches, etc), before stopping. Joker tells him how familiar this looks. Batman says it ends tonight. At this point it’s raining and their outside on a roof. Joker berates him for always being so practical. Then says:

“We’re not contractually tied down to rationality. There is no sanity clause. When you feel yourself locked onto an unpleasant train of thought, headed to the places in your memory where the screaming is unbearable-“

Batman interrupts him. “I know. I’ve heard it all before. Madness. There’s always…” A look of revelation falls across Batman’s face. Joker picks up the line. “That’s right. There’s always madness. Madness is the emergency exit. You can just step outside and close the door on all those dreadful things that happened. You can lock it away… forever.”

Batman taps his gauntlet and keys in a code. Alfred, Commissioner Gordon, Nightwing, Tim, and Oracle/Batgirl all show a message alert popping up on their screen. Batman launches into action. They have a very stylized fight. Lots of precision, from two older guys who have spent a lifetime fighting one another. Batman knocks a knife out of Joker’s hand.

They scuffle some more. Nightwing gets a feed on fight. Joker recovers his knife and they clash once more, but in it, Batman gets stabbed deep into the gut and goes down with the Joker stabbing him over and over. Batman lies bloody and broken on the floor. Joker throws the knife away and puts the barrel of the gun against Batman’s head.

“You know you don’t need that. This… fight… this madness between us. It’s done. I’m sorry I left you in your misery for so long. I was selfish. I loved being Batman so much… that I was arrogant enough to believe the world couldn’t function without me. I know better now. Thanks to you.”

Batman. “Yes. The emergency… exit. I’m locking this all away… forever.”

Batman dies. And then we see Joker realize what just happened. Without Batman, he truly has no reason for existing. He begins to go truly insane, howling his mad laugh until he’s sobbing tears. Then he stands up, looks at Batman’s dead body and says one last phrase. “I hate you.” Then he blows his brains out.

Movie ends with touching personal funerals, a decision to carry on his legacy. Gotham is minus the Batman, but not his family or what he stood for. Now they’re reminded of his message and they play it back. It’s a voiceover as we pan over the city and whatnot.

And it ends with Batman saying- “Batman is a symbol. One day I won’t be here to embody that symbol. But the symbol doesn’t need me. I need the symbol. If there should ever come the day, where the night finally takes me… don’t mourn. Don’t leave Gotham unprotected. Batman is just an idea. And ideas can’t be destroyed by anybody. I understand you may want to honor me. So I’m telling you this. In whatever way, whatever fashion, to the very utmost of your every ability… light the world, by embodying the symbol. Don’t try. Be.”

Fade to black. “Be the Batman.”