When I saw there was going to be a panel centering solely on the female characters of the Star Wars universe, I was surprisingly whelmed. Mind you, I thoroughly enjoy pretty much all the female characters, I champion them, I love that little girls have more relatable cosplay options, and I sincerely believe this is a conversation that needs to happen. There isn’t a genre in the world that is whole without a space for women to be women unabashedly and self celebrated. (Men have a responsibility as well to protect these spaces and support putting women in powerful places too- a lesson I drive home to the 4th and 5th graders in my superhero class when I get to teach it).

So, it wasn’t any type of faux machismo or a flare up of sexism which drove the consternation.

Rather, if I may be frank, it’s because Disney is the backbone of this thing. Star Wars has never recovered from its purchase by the mouse and that’s a fact verified by fan reactions and raw dollars. And a cursory examination of the type of content Disney currently produces reveals their tendency to flow with whatever is popular (see: the immediate firing of James Gunn followed by his rehiring months later) and to take advantage of under represented people now being “cool” in the public eye (see: Marvel’s new dedication to forming a gay superhero).

Their shows, the properties they acquire, a majority of their movies… there simply is not much “imagine” in “imagineer” anymore. Just a whole lot of engineering. At this point they’re basically printing money. And to a certain extent, can you blame them? If your company generated billions upon billions upon billions per YEAR… how focused would you be on truth, creativity, and ingenuity rather than the just okay formula that keeps the paper rolling in?

But Ashely Eckstein is one of my favorite people in the world (and she promised a giveaway!) so I decided to give it a shot. Afterall- I could always walk out if it became pandering and unbearable.

I wasn’t really focused on how good it could be, but nowhere in my wildest dreams did I anticipate this panel becoming my favorite one out of the whole Celebration. 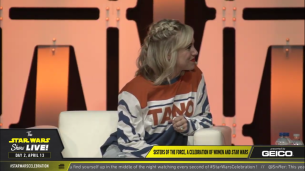 We all sat at rapt attention, barely breathing, as Ashley told us the story of a young girl who had beaten cancer three times already before the age of ten. This was a girl who was a HUGE fan of Ahsoka, one Ashley tearfully confided she had met at an event, and stayed in contact with the family afterwards. An image of the girl flashed onscreen, as Ashely shared that the girl was again battling cancer, but that she was confident the remarkable young Jedi would recover and win again.

Unfortunately the girl was unable to make Celebration- however, it was her birthday, so the panel and all of us in the crowd (maybe around a thousand people?), all stood up and sang happy birthday to this incredible girl via the live stream.

That was just the FIRST STORY!

Vanessa Marshall shared a personal story, about a young fan of hers who she had met a few years back. This girl was loud and excited and thoroughly unashamed about herself or her fandom. Then this girl changed schools, and began to be bullied because she was a big girl. In the class of what would be called over weight. And sadly… the bullying began to tear her down. The once boisterous spirit began to soften. To quiet. Her parents shared this information with Hera’s voice actress, who was devastated by the news and felt resolved to take more action beyond speaking to the girl and giving her encouraging words.

It is precisely at this moment that she goes behind the curtain and BRINGS THE GIRL OUT! This lovely, delightful young girl in her pink cosplay outfit is onstage with Star Wars celebrities before hundreds and hundreds of fans. Every last one of us stood to our feet and clapped and cheered for her. The love and light in the room went nuclear as Ashley herself murmured that she has family here and that she’s not alone.

Tissues were passed.
So much beauty.

Nearly everyone had a story like that. A tale of someone they had met, whose life they had engaged with, who had impacted them, who made the work worthwhile. I am not as familiar with everyone else on the panel as I am with Ashley, however- I know for a fact that Ashely has a dozen stories like that. She is so good at remembering names and faces from people she repeatedly sees at cons and Celebrations. She knows family and personal details. It’s incredible.

And I can only assume the rest of the panel carries that spirit likewise.

What is particularly striking to me about her inclusion… is that she’s a black woman. As riveted as I was by the whole entire panel, my attention kept slipping back over to her. Not only was she new, she was black, and being welcomed alongside veterans. Having her shine increased by their freely shared spotlight.

That is remarkably kind hearted of Ashley to do.

Twas the singular thought running through my head. She didn’t have to do that. She chose to do that. And she didn’t make a big deal of it either- she acted like it was the most natural thing in the world. As is proper.

Sisters of the Force is the panel Celebration needs. The panel Star Wars needs. In perpetuity. And not just for the heart warming, tear jerking stories- threaded nimbly throughout the entirety of the discussion were also details about working in the industry. Interviews, nervousness about writing, giving breaks to people because someone gave a break to you, finding your voice in these characters, working with cast that becomes family… all of it. There was enough professional detail involved for it to be helpfully informative without it tipping over into the formality of a master class, if you will.

I was shocked.
Touched.
Blown away.

But most of all…
Rekindled.

Sisters of the Force brought me the inspiration George Lucas instilled in me via the Original Trilogy a long time ago, in a galaxy far, far away.

If you want to watch the magic for yourself, click the link below and fast forward to the 6 hour and 24 minute mark!