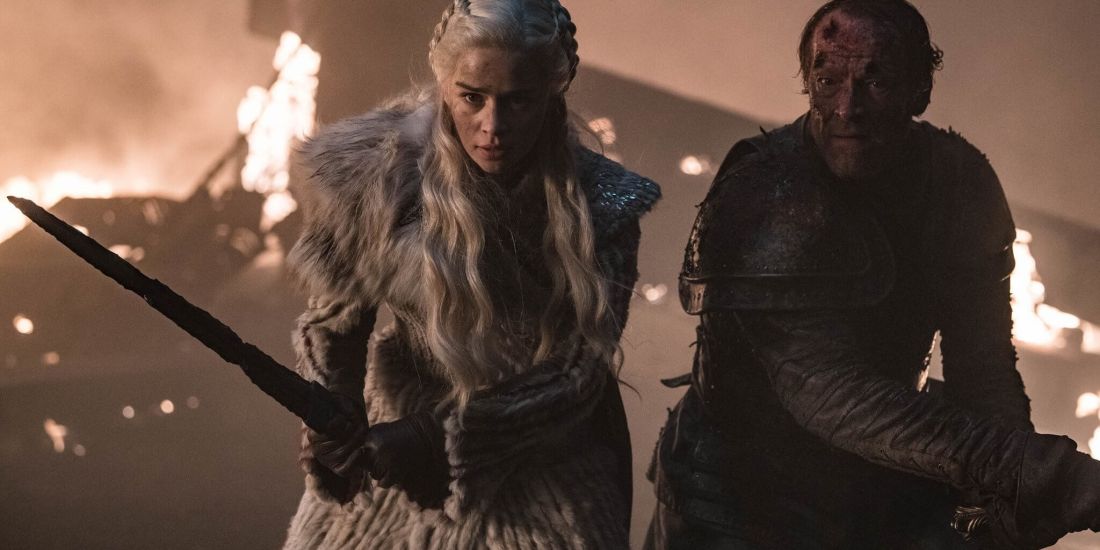 There were so many theories boiling around this episode- the speculation was astronomic. We all thought we had figured out their code and could guess what was next. Funny how that works isn’t it? We’re so wired for story that, even when we’re enjoying the surprises and twists a story provides, we can’t help but try to reverse engineer the moment. Use the components to make a future prediction. The most entertaining part is that every single GOT fan was certain that if their preferred theory wasn’t correct, that it was another one instead.

But you can’t become God by studying God’s ways or God’s methods. The gift of divinity is not the ascension to Deity.

We thought that because we knew GOT so well based on its ways and methods, that we had grasped GOT itself… when the very element of not knowing was the engine driving the whole show! Mystery is a key part of the great human saga, the one story uniting us all. Mystery. It’s not always meant to be solved- just allowed for in your factoring. It’s that intellectual hrm moment of- I don’t know what’s going to happen here.

We thought we had it figured out.
And rather than capitulate to anything within the realm of our guesses,
they fooled everyone by providing an EXPERIENCE.

They reminded us these were “real” characters… which was our initial buy in right? It’s more than dragons, and love, and murder, and fire, and yuck, and kingdoms.

It’s about each of the people.

Story can be calculated, but it is not a calculation.

You need both. If you calculate without experience, you get Batman v Superman. If you experience without calculation, you get The Last Jedi. That balance is necessary.

Digging into a bit of the episode itself though… may we all cheer the most valiant soul of all? Lol

Lord Commander of Shot Shooting.
Warden of the Unlaid.
High Ruler of the Friend Zone.

We all have a little Jorah in us. That one person we would have done anything for (who would let us do it!), but never reciprocated. The person who was as incapable of loving us as we were incapable of not loving them. There was something hauntingly poetic about his entire arc, even if he did let himself get played for most of it.

To be brutally honest- I saw way more of myself inside his heart motivations than I was comfortable with. To frame it up properly; Jorah’s entire position was hinged on neglect. He loved her… and forgot the rest. So then maybe it was poetry? She kept him at arm’s distance, she blatantly slept with other men, she stirred up his passions when she felt he was getting too far away from her, and never rewarded him when he managed to perform the impossible on her behalf.

Somehow… someway… he had convinced himself that loving her was enough. I am only a year removed from similar sentiment. It is peculiarly odd. This ink smeared notion, this

jagged idea, that love and affection can create states of fulfillment without the additive of reciprocation. The unconditionality of love does not negate the conditionality of its sustainability. Put differently- if you want the love and affection to last long, you have to nurture the environment you’re sending it into. Or be prepared to step away from that environment entirely for chunks of time as you replenish.

Because of course,
that’s what reciprocation does.
It keeps you,
by replenishing you,
and once you enter the cycle,
or regular replenishment,
you gradually come to know the deeper, sagacious swell of fulfillment.

And if you are IN something you constantly have to step AWAY from, perhaps you shouldn’t be in it in the first place.
Or.
Perhaps you’re not in it already and you just haven’t let yourself realize it yet.

And speaking of the beloved queen, I noticed she has not fallen as far from either tree (father or brother, but brother particularly) as she thought she had. Case in point. For as much as Daenyrus has scorned and mocked her dead twin, this past episode revealed how much she shared in his fatal flaw.

They both asserted that their bloodline was a bypass to personal development.

Daenyrus can’t fight and is just an okay leader. What she has going for her is that she is a special. A Chosen One. And she fell headfirst into the central Chosen One paradox: Being chosen is not enough.

Exactly the same pitfall that claimed her brother.

Through countless in depth studies ranging from Goku and Anakin, to Neo and Superman, and even to Bruce Lee and Jesus… it has become clear to me that being a Chosen One is roughly the equivalent to enrolling in university with your major already declared. Any benefits you have are those which come about from already acting on a decision rather than trying to decide what to act on. I would even postulate that the supposed “powers” accompanying chosen ones aren’t powers at all.

Every chosen one is equipped for their purpose, for Destiny is a benevolent goddess. And once the chosen one is on their path, all the energies and thoughts and emotions begin swinging into alignment allowing to the chosen one to conquer that most volatile territory of all- oneself. And from there, overflow the region with the disciplined rigors of their focused identity.

But being a chosen one, accompanied by nothing else, is not enough for anything but chronic frustration as you drop the ball over and over again.

And what’s REALLY wild though is that, despite sharing the same fatal flaw, Daenyrus benefited from the premise of the flaw itself! She and her brother both assumed having a superior bloodline replaced personal development… and the reason she had the gift and survived is because her blood was superior!

No personal development required!
Because chaos isn’t a pit…
Chaos is a ladder.
How’s that for poetic irony.

I would be remiss in my musings to leave out what I believe to be the moral and spiritual centerpiece of the entire episode. The face of what every inch of nuance was about. The embodiment of bodily imperfection bent in alignment with the righteous moral arc of the universe.

Theon. Greyjoy.
I mean- it’s in the name.

Theon was never meant to be the blazing symbol of enduring hope and unyielding light that Jon Snow has grown to become. Nor is he the pitch black depths of fury and putrid hate that Cersei so deftly and unabashedly embodies. His joy- taking this as fully embraced life force fueled by a sense of humbled goodness– is grey. Tempered by loss, sorrow, unwise choices, and time. The type of joy your grandfather emanates as soon as you set foot on his porch while he rocks idly on his chair. Theon was not after grandeur, did not fancy himself a hero, and yet was neither surrendering his will to fight over to despair either.

He planted himself beside Bran (the three eyed raven… which is black… but Bran has been a beacon of light this whole time, so what is black when you lighten it… grey. A stretch? Maybe… but is it?) and made it his task to buy Bran as much time as possible. The whole episode was about buying time (the Doth’raki for the main army, Jorah for Daenyrus, Jon Snow for Arya, etc). Everyone was buying time for everyone else, each fervently hoping this frantic game of chrono hot potato would meet a desired resolve before the Night King’s icy death claimed them all.

Theon was not fighting for life, or nobility, or redemption, or glory, or to stave off fear. He was fighting for time, down to the last second, sacrificing himself in his selfless assault against the Night King. Committed to giving Bran just a few precious moments more, precious moments without which Arya would have never made it in time. On a macro-cosmic scale, Arya’s victory was literally only because of every single person in the battle buying time for the next person… but on a microcosmic level, Arya would have not won the war without Theon specifically.

Too much the hero and he might have done too much too soon, and died.
Too much the avatar of the moral black, and self preservation would have won over sacrifice.
No, twas the greyest of joys that won the day.
In his final chapter, Theon pulsated the heart of the whole saga up until that point.

“Chaos isn’t a pit. Chaos is a ladder. Many who try to climb it fail and never get to try again. The fall breaks them. And some, are given a chance to climb. They refuse, they cling to the realm or the gods or love. Illusions. Only the ladder is real. The climb is all there is.” -Petyr Baelish, R.I.P.